Tetris and the Challenge of Curbing Chinese Sprawl 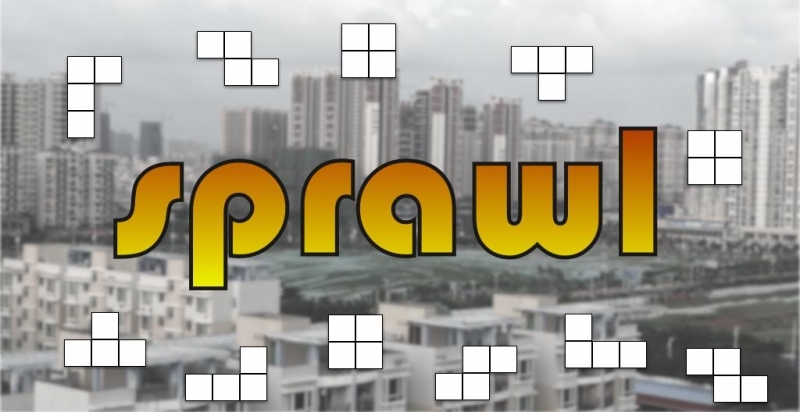 While Chinese cities are growing at an unprecedented pace, much of this growth isn’t what most city planners would consider “smart” — that is, growth that is efficient, equitable, and environmentally sustainable. Instead, most Chinese cities are experiencing high levels of sprawl. This has led both Chinese and international pundits to focus on the issue of Chinese sprawl, with some even asking why Chinese cities haven’t learned lessons from American cities. Is sprawl a sign that Chinese leaders don’t know what they’re doing?

In theory, sprawl can be limited by good planning. In practice, sprawl is an exceedingly challenging phenomenon to stop. Though there are numerous complex reasons for the growth of Chinese sprawl, there are three systemic factors driving Chinese cities’ expansive growth: unprecedented Chinese growth, local government budget dependence on land sales, and the importance of GDP growth in the Chinese political promotion system.

In a way, building cities is a lot like playing a game of Tetris — waves of incoming population and development fall like Tetris blocks. In theory, a player wants to pack in the shapes as tightly as possible, limiting gaps and completing as many full lines as possible. And that’s the strategy most players use at the beginning of a Tetris game when the pace is slow.

If you watch someone playing Tetris and they’re almost out of room to stack new blocks, it doesn’t necessarily mean the player didn’t have a strategy; it just means that they didn’t have time to respond, or didn’t correctly anticipate which pieces would actually appear.

City planners in major Chinese cities are playing a high-speed game of planning Tetris. They’re trying to place the metaphorical pieces as quickly and logically as possible. Like a Tetris player, they don’t always know which pieces will come next.

In a vacuum, some moves may look peculiar, but Chinese planners and local officials are often doing their best to keep “the game” going. In a game of Tetris, this means stacking blocks higher and less efficiently than you’d like; in Chinese cities, this means pushing development further away from the center of the city.

As of now, there isn’t an equivalent to a maximum number of rows in Tetris, so it makes sense to keep building Chinese cities outward. In this way, Chinese sprawl isn’t “dumb” growth; it is perhaps just “as smart as growth conditions will allow.”

Chinese Cities Depend on Growth

Cities throughout the world derive financial benefits from growth; however, tax structures benefit each place in different ways. One underrated but exceedingly important factor in the growth in Chinese cities is their land tax structure.

In many places (including the United States), cities have financial incentives for smart, compact development, particularly for property taxes. The higher quality of development, the higher the assessed value of the land that it sits on, and the higher level of property tax that a municipality collects from the property owner. These taxes are collected on an ongoing basis, giving municipalities strong incentives to provide quality services to these areas to keep them from losing value (and thus decreasing property tax collections).

Unlike places like the U.S., the Chinese government owns all land within its borders; to raise money, local Chinese governments divide up parcels of land and sell development rights to developers and investors. There is no post-development property tax. Therefore, Chinese cities receive a majority of their financial gain from growth at the beginning of the development process.

The money received from selling these development rights often make up close to 30% of a city’s income, so city officials face a tough decision: do they encourage smart, compact growth that limits the amount of land they sell, or do they chase short-term cash infusions by selling development rights to land further from the city center? Even if you’re a huge proponent of environmental protection, it is easy to understand why this is a hard choice for local officials.

The Chinese land tax structure also creates perverse incentives to investors to build in unnecessary places. In places with high property taxes, investors are discouraged from holding property for a long time, as they are required to continually pay taxes on this property. Over numerous years, tax payments add up and cut into overall profit when these developments are sold. In China, however, investors (particularly those with low financing costs) can sit back and (theoretically) wait for demand to pick back up again. While investors wait, buildings with unsold space sit empty; some pundits have speculated that this has fueled the growth of Chinese ghost cities.

The structure of the Chinese political system also encourages unchecked growth that results in sprawl. This is because the Chinese political system works a lot like the farm system in Major League Baseball, with most officials beginning at lower levels (county & city) and moving to higher levels (provincial and central). Officials with strong track records (and strong guanxi) have the best chance to rise within the party to higher levels of government with greater amounts of power.

Though there are numerous ways to measure success for Chinese officials, traditionally the most important has been economic growth. Infrastructure investment and real estate development are major components of local GDP growth. Furthermore, spending on environmental improvements over transportation infrastructure has been found to have negative effects on promotion odds.

Encouraging smart, compact growth becomes a risky decision. If smart growth policies slow cities’ growth, they not only endanger municipal budgets but also jeopardize political careers. In this light, Chinese sprawl isn’t the result of incompetent technocrats who don’t know what they’re doing; instead, it’s the result of Chinese politicians recognizing the importance of this growth in progressing their political career.

There is reason for hope. Since coming into power, Chinese President Xi Jinping has pushed for reform in the Chinese political promotion system. Major news organizations like Bloomberg are reporting that “going green” is now as important of a metric as GDP growth for rising party officials. It’s still too early, however, to tell whether these reforms will have a meaningful effect on the Chinese political system.

So why are Chinese cities sprawling? It is not because local, provincial, and national officials don’t recognize that current growth patterns aren’t environmentally or financially sustainable. Instead, the financial and political incentives built into the Chinese system favor fast, “dumb” growth rather than slower, “smart” growth. The challenge of accommodating a large inflow of rural migrants is exacerbating these pressures.

Local government officials didn’t write the unofficial rules that dictate city growth. Sprawl isn’t necessarily a sign that they don’t know what they’re doing; rather, it’s potentially a sign that the “rules of the game” push them towards unsustainable policies. Chinese sprawl is not inevitable; rather, to push Chinese development towards a more sustainable path, officials at all levels of government will have to consider how they can reform the “rules of the game” to encourage smart, sustainable growth.

« Are Chinese Subway Systems the New American Interstate?Solving Problems Across City Borders: Opportunities and Challenges to Regional Planning in China »