Solving Problems Across City Borders: Opportunities and Challenges to Regional Planning in China 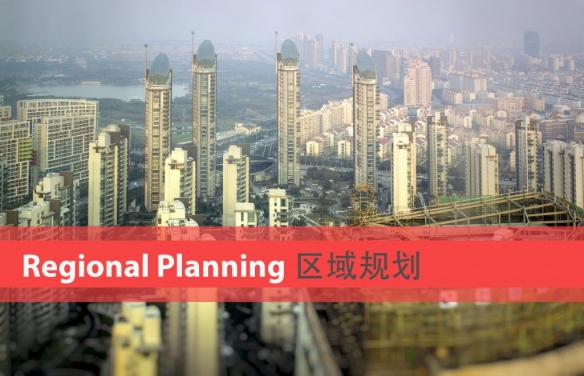 Photo by Thomas Depenbusch / Photo edited by Author via CC BY

Though decentralization has spurred economic growth, it has also brought challenges. In particular, there has been a rise in local protectionism, with local government officials focusing on growth in their own municipalities at the expense of surrounding areas.

The Chinese government increasingly needs to balance the priorities of central and local governments. Furthermore, many problems, including environmental protection, are just handled better on a regional rather than city level. As such, there has been significant growth in the rise of regional plans over the past decade.

When developing regional plans, policymakers look at existing and projected resources within a region (including people, natural resources, infrastructure, and industries) and analyze the opportunities and challenges that will shape the region’s growth in the future. Both regional and local leaders use this information to develop policies that limit redundancies, encourage cooperation, and maximize the potential of regions. Regional governments can both help create these regional plans by bringing nearby city officials together and can, in theory, help implement these plans.

Regional planning can prevent a “race to the bottom.” For example, if one city implements environmental protection measures that increases the cost of development, neighboring cities may view this as an opportunity to attract developers with their lower environmental standards and costs. This can lead to a chilling effect for the implementation of environmental protection policies. Strong regional governance can limit this effect by ensuring that nearby cities implement similar policies and play by the same environmental rules.

Regional governments can handle problems at scales beyond the city level. If a major city like Beijing forces factories within its city limits to close because the factories produce too much air pollution, these factories don’t necessarily shut down forever. They may move to nearby cities with more lax air pollution policies. In cases like this, the net pollution produced in an area will not decrease; it moves to other areas. By tackling problems at the regional level, the Chinese government can make meaningful strides towards addressing larger goals.

Regional economic planning encourages the clustering of talent in ways that build the greatest economic good for an entire region rather than one area. When industrial clusters grow in a city, the cost of growth for companies decreases as the supply of trained workers and the infrastructure necessary for that industry to thrive increases. This theory has been used to explain the development of Silicon Valley and other major innovation hubs. By developing distinct roles for cities within a region and decreasing intra-regional competition for industries, Chinese regions can develop these specialized regions necessary to compete in the global marketplace.

There is growing evidence which indicates Chinese leadership understands the importance of regional governance. President Xi is a strong supporter of the Jing-Jin-Ji regional area (Beijing, Tianjin, and the surrounding Hebei region). Regional authorities in the Pearl River Delta and Yangtze River Delta also show that Chinese leaders are thinking regionally.

Regional plans are designed so that everyone in a region is better off for participating; however, these plans often require concessions from local governments. A city may benefit from improved air quality and interconnected transportation due to region-wide planning and policies; this same city may also be required to limit its recruitment of desirable industries so that other cities within the same region can develop economies of agglomeration. For many local governments, the incentives (i.e. carrots) for participating in these regional plans just aren’t great enough. Local officials may balk at policies that limit their cities’ growth potential despite the potential environmental and quality-of-life benefits of regional planning.

Though the decentralization from central to local governments has spurred economic growth, cities aren’t capable of tackling large issues like environmental protection on their own. With the emergence of regional plans across China, the Chinese government has shown that it recognizes the importance of solving problems on a regional level. It remains an open question whether these regional governments possess the carrots and sticks necessary to implement these regional plans.

« Tetris and the Challenge of Curbing Chinese SprawlHong Kong’s Wong Chuk Hang: How Long Will it be the “Undiscovered Gem” of HK’s Creative Community? »