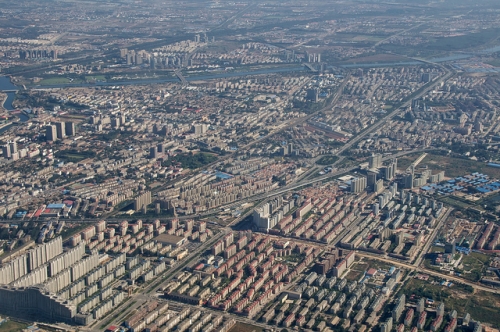 As China’s expanding cities inevitably swallow up surrounding countryside, the boundaries between urban, rural and suburban areas become progressively more blurred. What today might be farmland could tomorrow be the next central business district sprouting state-of-the-art skyscrapers. This fast-changing reality makes defining what constitutes urban vs suburban with developed-world standards insufficient. China needs its own definitions.

Dan Chinoy, a student at Beijing’s Tsinghua University, ponders this conundrum with a post for The Atlantic titled “Is this Beijing’s Suburban Future?“. As Chinoy gets further from Beijing’s center, he describes coming upon what seem to be the remnants of a village. He explains:

“This suburban expansion has taken place so quickly that in some places, it has created what are known in Chinese as ??? or chengzhongcun, which translates roughly to village-in-a-city: older mud and brick houses and abandoned fields surrounded by brand new apartment complexes.  Often, residents of these villages choose to rent them out to migrant workers.  Some even build small apartment buildings of their own and become full-fledged landlords.  This creates something that’s not quite a slum, but not exactly a well-regulated residential complex either.”

The existence of this not quite slum, not quite well-regulated residential complex will probably be a short-lived phenomenon as soon as full-fledged urbanization reaches it. Rather than being a permanent condition, the suburban experience Chinoy describes is a perfect example of the transitory and sometimes flat-out contradictory condition of China’s urbanization process.

The Atlantic: Is this Beijing’s Suburban Future?

by Adam MayerPosted in Beijing,Housing,Rural Development