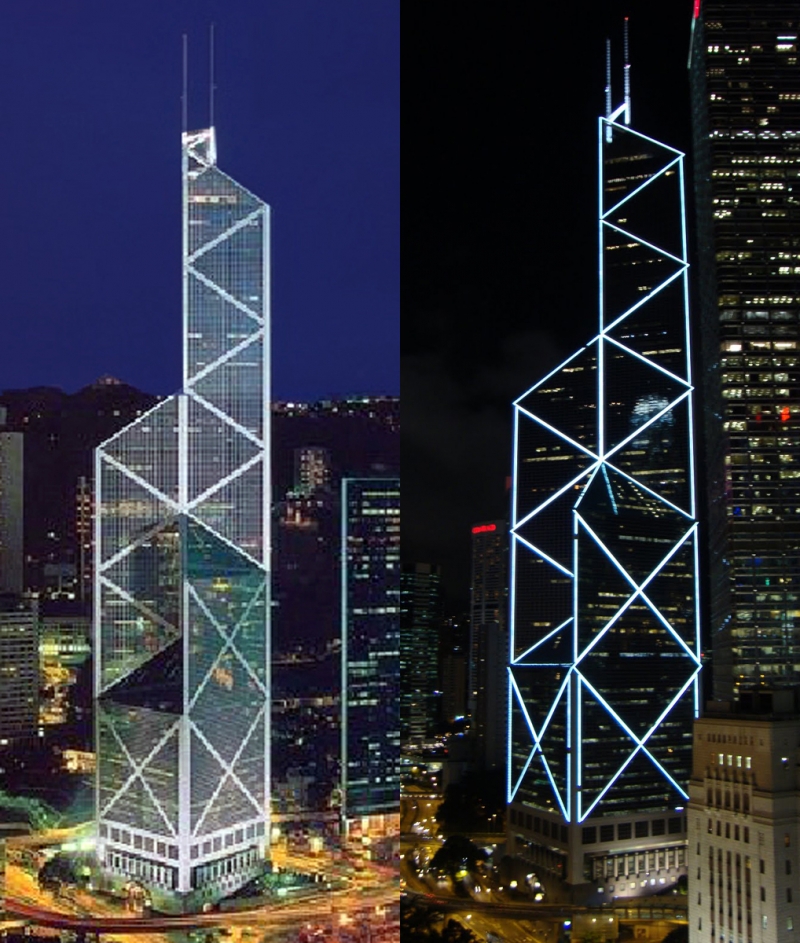 The following post was written by John Yuan, a Chinese-American architect who worked on the design of the Bank of China building in Hong Kong during his tenure as an employee of I.M. Pei’s architectural practice:

Since first returning to visit Hong Kong around the time of the handover to China in 1997, I noticed that Bank of China Tower appeared strikingly different at night during subsequent visits over the next decade. I never imagined that the exterior lighting scheme for the tower would ever be altered from the original design done by Fisher Marantz, the lighting consultant to I.M. Pei’s office on the project.

Even from the beginning of the design process, illuminating the tower at night posed great challenges. The tower stands over 300 meters tall and has an exterior covered mostly in reflective glass- characteristics which both posed difficulties for the nighttime lighting design.

By carefully aiming spotlights from the ground up at the tower, Marantz managed to evenly illuminate the soaring tower from top to bottom. The vast area of the dark window panes, sprinkled with lights from the interior spaces and bounded by the illuminated aluminum panels at the corners, created a compelling image. The tower seemed almost transparent outlined by the illuminated borders– a proud structural skeleton standing in the Hong Kong skyline.

I first grasped the death of the original exterior lighting design during a visit in 2006. Arriving in the evening and riding in a cab on my way to a Mid-Levels hotel, I passed by the tower but I couldn’t see it, except for its pencil-thin but brightly lit outline. Strips of LED had been inserted into the originally unlit feature line dark grey aluminum panels. The LED, set at such high intensity, rendered the interior office lighting feeble by comparison.

In my very last visit, the tower illumination further deteriorated from what Bank of China, a Class A office tower, deserves. The LED remain but are now programmed to light up in sequence as if the building is being sketched out in the night sky. The tower might as well be an animated pillar in an amusement park.

Despite the changing illumination schemes, the nighttime view of Bank of China never conveyed what the tower does during the day. Pei referred to the structural cross bracing as ‘diamonds’ (after the client reacted negatively to the ‘X’ shape of the bracing), but the real diamond quality actually comes from the refraction of natural light on the tower’s geometrically accentuated massing during the day.

Lighting the tower at night, even with the original illumination scheme, did not do justice to the unique form of the building. The outlined LED lighting exacerbated the problem further by making the well proportioned edge panels disappear. Unfortunately, the result is a tower lacking presence with the building volume flattened into the night.