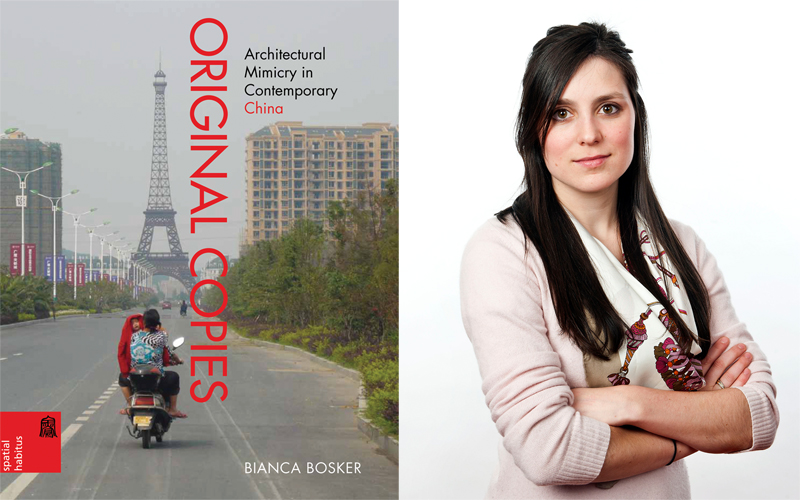 The widespread pirating of architectural motifs in China’s developing urban landscape is a well-documented phenomenon. From Alpine Villages to starchitect-designed superstructures, Chinese builders often seem to have no shame in copy and pasting designs originating from far away places.

This perplexing and culturally intriguing topic is the subject of a new book by Bianca Bosker, Executive Tech Editor for The Huffington Post. Original Copies: Architectural Mimicry in Contemporary China (University of Hawaii, 2013) examines the trend of “duplitecture” in China – the construction of monumental, themed communities that replicate the cities and towns of the West, frequently drawing on historical European archetypes.

Bianca was nice enough to answer some questions to help give us a better idea of what her book is about:

Adam Mayer (AM): What prompted you to write a book about architectural mimicry in China and how did you become interested in this topic? What message are you trying to convey by writing this book beyond showcasing the fact that China likes to copy buildings?

Bianca Bosker (BB): My interest in this architectural movement started during a research trip to China when I first discovered Shanghai’s “One City, Nine Towns” plan, an urban planning initiative devised by local officials that called for ringing the metropolis with ten satellite communities each built as a full-scale replica of a foreign city and designed to house hundreds of thousands of inhabitants. German architects were commissioned to build the German-themed town; British architects were tapped to design ye olde, English-style “Thames Town,” and so forth for the Italian, Scandinavian, Dutch and other European-style towns. The experience of visiting these communities is, to quote the slogan of one of the residential communities, “Out of expectation with common sense.”

I was intrigued by how at odds these developments were with the futuristic, hyper-modern skyscrapers being built – and touted—in China’s metropolises; how dramatically these communities split with China’s own rich architectural traditions; and the gulf between the excitement among developers, residents and officials for these themescapes on the one hand, and the disdain with which they were regarded by many critics and architects on the other. My quest to understand why these were being built – and what they could tell us about the makeup of the 21st century “Chinese dream” – is what led me to my book.

The goal of Original Copies, which takes readers inside the homes in these communities and into the minds of the officials and architects that built them, is to explain what factors have given rise to China’s en-masse importation of Western landscapes, right down to statues of Winston Churchill and Venice’s Saint Mark’s square, and what it means. The message is also that these buildings speak to an important inflection point in contemporary China from closed-off, top-down society to one where individuals are increasingly able to exercise small levers of power and individual choice. And that this architectural movement, which on the surface appears to many observers a sign of China’s infatuation with the West, are actually are monuments to China’s achievements and progress, not to the West’s.

“The hardware may be all Western,” explained a resident of Shanghai’s Thames Town, “but the software is all Chinese.”

AM: Is it fair to criticize China for being a copycat when the U.S. does the same thing (e.g. Las Vegas) with architectural styles from around the world? Is co-opting European stylistic motifs simply just a universal desire for the aspiring global nouveau riche class?

BB: You’re absolutely right to highlight the U.S.’s own lengthy tradition of copying European architectural prototypes, from Italian palazzos to English Gothic designs. The campuses of Princeton and Yale were knockoffs of Oxford and Cambridge in their own way. And before we try to criticize China for building a “Beverly Hills” development or “Venice Water Town” (in Chongqing and Hangzhou, respectively) we might consider New York state is home to towns like Ithaca, Athens and Troy. (The book, I would also note, isn’t focused on casting a value judgment on China’s copycat architecture, but rather explaining why it exists).

However, there are a few important differences between Las Vegas and the “duplitecture” in China. For one thing, Las Vegas is a tourist destination that offers temporary admission into a fantasy experience, while China’s themed communities are homes. Developments such as Stratford or Rancho Santa Fe are living, breathing neighborhoods where Chinese families raise children and live out their lives. What’s surprising about China’s architectural imitation is also the scrupulousness with which communities have been copied and the foreign origins of the originals, like Versailles and Orange County, that are being imitated. The architectural “copycats” in the United States draw from on the architectural styles of peoples who share the same geocultural genealogy. China is pulling from a geopolitically, temporally, and culturally alien and remote civilization.

Certainly we’ve seen the “aspiring global nouveau riche class” embrace these themed developments in countries from the United Arab Emirates to the United States, and I write in Original Copies that many newly minted middle- and upper-class Chinese have embraced Baroque townhouses or Tudor-style homes as a way of showcasing their success and identify themselves as belonging to a certain class. To many, a French villa is as much a symbol of luxury as the Chanel “C’s” on a designer handbag. But to suggest that these copycat-communities are “just something the nouveau riche does” oversimplifies the situation and misses important nuances that illuminate a uniquely Chinese attitude toward replication and a kind of crisis point in the development of China’s own contemporary architectural styles.

AM: Property developers in China often tell me that traditional Chinese architecture is “too difficult and expensive to build”. In your research did you also find this to be an excuse for not continuing with a Chinese vernacular architectural language?

BB: Yes, though the excuse I encountered was also that traditional Chinese housing styles didn’t allow for high-density construction. The developers I spoke with argued that the Western townhouses and “villas”, though hardly exemplars of “green” building practices, were more efficient in the sense that they could squeeze more properties on a single lot than if they were building, say, traditional Chinese siheyuan courtyard homes (Anyone who’s visited these developments can tell you that even the ones with enormous McMansions  packed the homes extremely close together).  As I note in my book, according to one Hangzhou architect, the “European style is better equipped to increase land use than traditional Chinese architecture of the past.” However, if there’s demand for that particular style, developers can – and have—found a way to make it work (see below).

AM: What is the future for Chinese architecture? When Chinese middle class reaches a point of stability, having met its most basic needs, will more people desire ‘authenticity’ in their buildings? If so, how do you see this manifesting?

BB: Lots and lots of experimentation, with constant reinvention. As we’ve seen from projects like the “One City, Nine Towns” plan or CCTV Headquarters, China has the luxury of being able to execute bold experiments in architecture and urban planning – sometimes for better, sometimes worse – thanks to the government’s power and pocketbook, as well as the sheer speed of urbanization and construction. And these projects sometimes disappear as quickly as they appeared: Shenyang’s New Amsterdam themescape, an incredible, sprawling landscape with a copy of Amsterdam’s train station and a replica of the Peace Palace in The Hague, was demolished not long after it was built. One Chinese developer’s hypothesis has stuck with me: while the U.S. builds buildings meant to last lifetimes, he argued, China is more likely to see buildings as temporary and disposable, due in part to China’s more conservative land-ownership laws.

I don’t think “authenticity” for Chinese architecture necessarily means building siheyuan courtyard homes or shikumen lanehouses. Still, it’s worth noting that some developers are already building themed communities that embrace traditional Chinese architecture as their template, rather than, say, Palm Beach. Developments like Cathay View in Beijing or Fifth Garden in Hangzhou replicate more indigenous architectural styles – and are just one more way for developers to distinguish their offerings in an increasingly crowded real estate market. These communities aren’t exact replicas of traditional Chinese homes, however, and oftentimes have floor plans very similar to the Western residences, only with more “Chinese” exteriors. I envision China developing its own unique style, though what it will look like exactly remains to be seen. Perhaps in another generation Versailles will seem as much Chinese as French.

Many thanks to Bianca for taking the time to answer our questions. Please check out her new book “Original Copies Architectural Mimicry in Contemporary China“, out now, which can be ordered here at Amazon.com