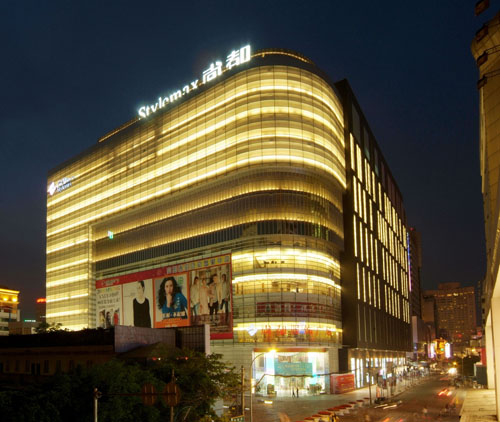 Last week I had a chance to chat with Russell Flannery, the Shanghai bureau chief for Forbes magazine, at a conference I spoke at in Luoyang, Henan Province. I talked to him about the shift in real estate development focus in China from residential to the retail and commercial sectors. Below is a reproduction of the interview from Forbes:

So says Adam Mayer, a USC-educated senior project architect based in the western Chinese city of Chengdu for Cendes, a Singapore-founded architecture firm with projects in more than 20 Chinese cities.   Rapid growth in Chinese retail spending, he says,  “represents a shift of the Chinese economy from one of production to a more domestic, consumer-oriented market.”

I talked to Mayer on the sidelines of a conference about the business outlook in central China held yesterday in Luoyang, one of China’s ancient hubs. The event was being organized by Forbes China, the licensed Chinese-language edition of Forbes magazine, and the city government, and attracted speakers from IBM and GE. Excerpts follow.

Q. China’s government seems to be slowing down the pace of the real estate industry right now. To what extent do you feel any of that in your own company?

A. We do see it in the sense that there’s a shift away from such rapid development of residential property. Not all residential types, though, just, specifically, the high-rise clustered residential you see in all cities across China. The shift is more toward villas, which in the U.S. we would call detached houses. These are not intended to be primary residences. Rather, they are intended and marketed towards wealthy individuals who want a second home or a vacation home that’s outside the city.

What we’re seeing now is a huge growth in the retail sector in the design and developments of shopping malls, especially in Chengdu where we have a lot of work, and also in Kunming, the capital of Yunnan Province. We’ve been seeing a lot of mixed-used developments in the planning phases now. These are typically 4-5 storey retail shopping malls (that) in architectural terms we call a podium. These are usually high density sites. They have high floor to area ratios, which are zoning numbers that tell you how much square meters you can build on that site. These are usually in center city areas, and also around the second or third ring roads that are developing out from the center, typically around transit hubs where there might be a subway station. There are retail podiums with office towers, or it could be a hotel tower and also some residential tower on top.

A.  I think it’s really more about retail. The developers are maximizing the FAR (floor to area ratio), and that’s why they’re building towers on top, but the retail really represents a shift of the Chinese economy from one of production to a more domestic, consumer oriented market. So we see real estate developers really pushing hard (on) the retail development.

Q.  In the old days, Chinese developers were making plenty of money just by building those tall residential buildings and selling them out quickly. Now, those same builders appear to be increasingly interested in commercial property. Do you see signs of that?

A. For sure. If developers are only in the residential sector, they definitely need to diversify. Also, when it comes to geographical development, (there’s a) shift of development of China moving from the coast inward (and) west. We see that happening to even further west than Chengdu, and, if you can imagine, into Urumqi and Xinjiang Province.