View from the Ground in the Chengdu-Chongqing Economic Zone 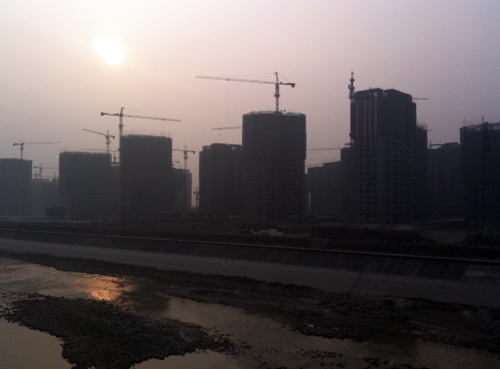 The following post is an adaptation of a comment I made on my good friend and Chengdu-based American writer Sascha Matuszak’s recent ChengduLiving article about the development of the Chengdu-Chongqing Economic Zone. The comment recalls my own experience of a business trip to one of the smaller cities in the zone: Jiangyou, Sichuan Province:

Thanks for the update on the Chengdu-Chongqing Economic Zone, Sascha. Having been to several of the 3rd and 4th tier cities in Sichuan you mentioned (Suining, Mianyang, Nanchong, etc..) I’ve often wondered how the prosperity in the region’s two dominant cities (Chengdu and Chongqing) would trickle into these other cities as well.

It seems as if most of the young ambitious Chinese people I meet from these cities who now live in Chengdu feel like there is nothing left for them in their hometowns. They also tell me that if they want to move ahead the best opportunities are found in Chengdu or Chongqing.

This isn’t to suggest that Chengdu and Chongqing will continue being the only cities absorbing all the region’s young, educated and ambitious talents. As is clear from what you wrote, the government is pushing for the prosperity to spread throughout the region. And given the enormous combined population of Sichuan Province/Chongqing Municipality at a whopping 110 million people, this is certainly a reasonable plan.

Unfortunately, observations on the ground often tell a different story. About a year and a half ago I was in a city called Jiangyou (famous as the hometown of the poet Li Bai and now actually considered a part of greater Mianyang) to meet with a housing developer for a potential new project. The developer had just finished building a series of faux Italian-style villas on the outskirts of town and reveled in showing us the finished product. No one had moved in yet, but the units were sold out.

Why anyone would buy these villas as anything other than a pure (risky) speculative investment is beyond me. Quality of life couldn’t possibly be a factor. Just outside the gates of the project, the developer drove us around in his brand new Mercedes-Benz to show us what is Jiangyou’s newly planned ‘center’. At this time, it was nothing more than block upon block of empty dirt lots, cleared away for new development. No people in sight except for a few construction workers taking a cigarette break. There were absolutely no amenities in the area and the air full of dust.

The developer then drove us to the real center of Jiangyou about 5km down the road. Finally, signs of life abounded as local residents went about their day in the downtown area. Though the downtown Jiangyou locals didn’t look like they suffered from abject poverty, a brand-new Mercedes with a young laowai passenger inside was enough to stop people in their tracks and turn a lot of heads.

We stepped out of the car and walked through the center of town, which was a series of 1-2 story ramshackle shacks that were destroyed in the 2008 Wenchuan Earthquake. The buildings were too damaged to be safely occupied, yet markets still flourished in the pedestrian street directly in between the collapsed buildings.

The juxtaposition of the physical damage with the bustling life on the street gave the place the feeling of a disaster zone frozen in time. Given the time since the earthquake struck, I wondered why there hadn’t been any progress on clearing out the damage.

I got my answer when the developer took us to Jiangyou’s planning department- a bland, 5-story grey building with peeling paint, typical of government of offices in China’s 3rd and 4th tier towns.  Inside the building, there was not a soul in sight in the poorly lit hallways and stairwell until we got up to an office on the 3rd floor that reeked of stale cigarette smoke. A middle-aged man with a baijiu-belly offered us plastic cups of teas leaves with lukewarm water and introduced himself as one of the officials in charge of urban planning for the city. Maps of the city and region covering the walls of his office confirmed his position.

What we found out in that meeting is that despite an outward appearance that would suggest otherwise, the city of Jiangyou is rich. Or rather, the city government is sitting on top of piles of cash that was given to them by the central government as part of the Wenchuan Earthquake rebuilding effort. At that point, there was not much to show for the money they had received except for plans drawn up on paper. So far, our potential client, the developer of the luxury Italian villas had been one of the few in Jiangyou savvy enough to use his connections with the local government to gain favor and build the project, even though it was clear that the money might’ve been used for other, more pressing matters (e.g. clearing the rubble in downtown).

And while the planning official was soliciting master plans for redevelopment of the downtown area, most of the effort was still on developing the ‘new’ center with plans for new government offices and more luxury residential projects. I found it more than unfortunate that this took precedence over rebuilding the place where most of Jiangyou’s population lives.

Upon leaving Jiangyou, my Chinese colleague said something to me akin to “f*ck that guy”, in reference to the developer who showed us around. Apparently there was more going on than I could gather from my limited understanding of Chinese at the time.  Yet despite these misunderstandings, the physical state of the city said enough about where the rebuilding money was going.

Ultimately, it is the countless smaller cities like Jiangyou that will determine the future success of China (it is also good to keep in mind that city size is relative, and although Jiangyou is ‘small’ by China standards, the population sits at almost 900,000 people). With the upcoming government leadership change and an economy that begs for an evolution in its level of transparency, the fate of the country lies within its urban areas, especially the ones not on the international or even national radar.

« An Architect’s Guide to Working in ChinaPoliticizing the Pritzker »