China Surges Ahead While Ideological Battles Hinder the U.S. 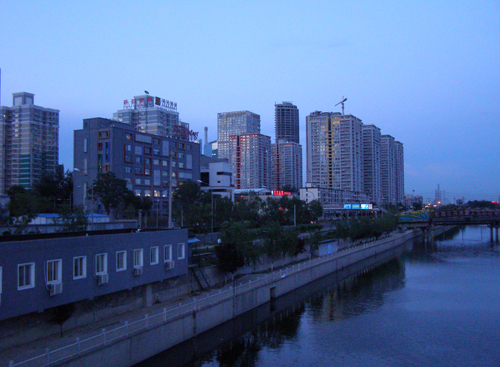 “Public policy, stripped to its basics, is a choice among value alternatives. What one person will vehemently contend is the correct policy and another will say is wrongheaded will not depend on empirical measurement, but on the person’s values, philosophy, and ideology.” – John Kasarda

While in the above quote Kasarda, business professor at UNC-Chapel Hill and co-author of the book Aerotropolis, refers to individual values, the same rule is also applicable to groups and institutions. This is certainly the case in the United States where the government  is in the midst of tense negotiations over the so-called ‘debt ceiling’. America’s two main political factions, Republicans and Democrats, are currently at a loss of coming to a consensus due to ideological hangups.

Republicans, who favor severe austerity by cutting social programs yet oppose any sort of tax increases, are unwilling to compromise. The Republicans’ flawed ideological-based approach to solving America’s  economic turmoil comes at perhaps one of the worst times in the country’s history with unemployment at an all-time high and millions losing social benefits. Even Vice President Joe Biden recently told Republican lawmakers that their “intransigence over taxes is a matter of ideology not economics“.

The Republicans’ approach to economic recovery is almost perfectly antithetical to what the Chinese government did in their response to the global downturn in 2008. It isn’t that the Chinese government ‘raised taxes’ or increased spending on ‘entitlements’- what they did do was stimulate their domestic economy through ordering banks to lend and beef up spending on national infrastructure and urban development. This ensured that the country kept on pace with modernization and kept its huge population busy and employed even while export manufacturing slowed.

China’s strategy in dealing with economic problems is inherently pragmatic and non-ideological. This may come as a shock to those in the west who still see China as representing a Marxist-based Communist ideology (also see “America’s Dangerously Out-of-Date View of China“). In fact it was Deng Xiaoping, China’s great reformer who famously said that “It doesn’t matter if a cat is black or white as long as it catches mice.”

It is important for those in western countries to understand that if it seems there is still residue of Maoist ideology lingering in China today it is merely rhetorical in nature- used by some in China’s leadership to appease dissatisfaction with class disparity and encourage a collective sense of meaning into its people. Don’t be fooled into thinking that China is in danger of reverting back to a time when intellectuals were forced to labor in the countryside or misinformed ideological-based policies resulted in famines.

Some commentators also predict that China has a ‘Sword of Damocles’ lingering over its head due to over-investment in fixed assets. Their predictions rest on the hope that once China’s economy crashes, it will once and for all prove the victory of the ‘free-market’ ideology over China’s ‘centrally planned’ model. Don’t bet on it.

Using ideology as a means to argue about which economic or political ‘system’ is superior is a relic of Cold-War mentality and completely irrelevant in today’s world. China knows this and other developing nations are starting to pick up on it. Unfortunately many in the west, and especially the United States, still feel they can justify moral superiority with their ‘system’. While in the past falling back on its narrative of ‘land of the free’ has worked for America, paying lip-service to a feigned moral superiority no longer holds as much weight.

Robert Herbold, former chief operating officer of Microsoft, picks up on this notion and writes a wake up call to the U.S. in a recent Wall Street Journal opinion piece titled “China vs. America: Which is the Developing Country?” Like many other executives and high-fliers who spend some time in China, Herbold is amazed by the country’s achievements and dismayed by America’s comparative lack of ambition . He concludes his piece by writing:

“Let’s face it—we are getting beaten because the U.S. government can’t seem to make big improvements. Issues quickly get polarized, and then further polarized by the media, which needs extreme viewpoints to draw attention and increase audience size. The autocratic Chinese leadership gets things done fast (currently the autocrats seem to be highly effective).“

Perhaps more discouraging than Herbold’s observations is the WSJ comments section, with most commenters overwhelmingly disagreeing with his assessment and some even resorting to ad hominem attacks. Despite what these anonymous commenters think, the facts are facts: China is moving ahead while the U.S. is falling behind. Herbold is spot on to call out the polarization of the U.S. government as being the primary reason this is the case.

Polarization within the U.S. government stems from the ideological preoccupation of both the dominant political parties. For instance, Republican lawmakers use the threatening rhetorical meme of ‘socialism‘ to argue their position for fiscal austerity. If taxes are raised and money is spent on public services (or even much-needed improvements to public infrastructure), the Republican theory goes, then the U.S. becomes a socialist state.

The Democrat side for its part has largely turned its back on small business and blue-collar workers: the party’s traditional backbone. Instead, the Democrats have succumbed  to interests that work to stifle productive industry: namely the environmental lobby. While pandering to idealistic greens and the ‘knowledge-work will save us‘ cohort, the Democrats have more or less forgotten about the middle-class.

China and the rest of the developing world is not going to wait for America to get its house in order. It would be wise for leaders in both parties to acknowledge this cold hard reality and put aside ideological talking points during this moment of fiscal crisis in America. Unfortunately, that might be too much to ask in a culture which puts so much emphasis on election cycles and side-show campaigning.