China Leaping Ahead With High-Speed Rail 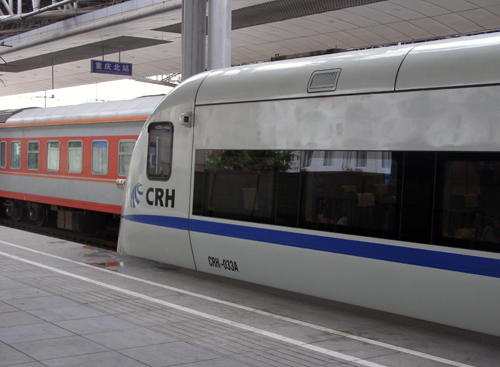 Fast Train from Chengdu to Chongqing

As America continues its game of high-speed rail hot potato, China has quietly finished laying the tracks for the longest bullet line in the world. Spanning more than 800 miles, the line will link the Chinese capital of Beijing with Shanghai, an economic hub on the east. Travel between the two cities will drop to four hours—down from 10—when train service begins in 2012.

Well there you have it folks. China is pulling far ahead in transportation development with its comprehensive high-speed passenger rail system. Meanwhile, Megan McArdle at the Atlantic writes about why the U.S. will not get China’s high-speed rail. She makes some very good points, including the fact that China has a higher concentration of densely populated metropolises close to one another than in the U.S.- creating a demand for high-speed rail.

McArdle might be onto something here, as opponents of high-speed passenger rail in the U.S. worry about low ridership levels due to the sprawling, low-density nature of the country and its cities- which are, as the argument goes, better served by the private automobile.

Low ridership is definitely not a problem in China, where it is advisable to book tickets for high-speed rail routes at least 5 days in advance due to a huge demand. Whether this would be the case in the U.S. or not would be difficult to predict. For China, a comprehensive high-speed rail system is perhaps the crowning accomplishment on its path to economic and urban dominance.